Back to the top

This month marks our first SuperFan Spotlight! The spotlight is on Kim Reaves Tate. First, you might ask “What is a superfan?”. A superfan not only loves our music, but loves the band and craves a personal connection with us as individuals and has an active role in our rock ‘n roll journey. Interestingly, Kim is the sister of our drummer Ken “The Muffer” Reaves. She attended our first live performance in 2014, all of our national opener shows including our first show opening for John Corabi in 2015, while sometimes clearing personal hurdles to make the two-hour drive to Metro Atlanta. Kim Reaves Tate, we salute you as one of our top soldiers and love you to the end of the earth. 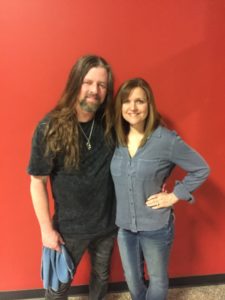 “No brother could ask for a better supporter of his musical endeavors”, says Ken “The Muffer” Reaves, drummer/backup vocalist of O.D.D. “Kim has been by my side as a supporter for 45 years. She was there with me playing air guitar with Tennis rackets to Kiss Alive in 1976. She was there when I brought home my first drum set (Sears trap kit) and attended my first live performance on a raised patio in our neighborhood in 1976. “I’m sure that listening to me play in our home became monotonous as well as listening to me practice vocals to “Journey Infinity”, says The Muffer.

Today, as with most adults, life throws plenty of complications Kim’s way, as she has a special needs son that requires around the clock care. She doesn’t let this stop her from making a number of tactical arrangements for his care and driving two-plus hours to Metro Atlanta to support O.D.D.. This is proof that if you really want to do something, you make it happen! Kim always pays for show admission and merchandise even though she’s fully entitled to all of the band perks. Kim says, “It’s my way of supporting the band…I know it’s not always financially fruitful for you guys…call it a contribution to one of my favorite charities!”

“I vividly remember a dark time in my life, while going through a divorce and simultaneously touring with an indie label band, that Kim gave me a place to live and a vehicle to drive. The vehicle was stolen while parked at a band members house in Atlanta. Kim took the insurance money from the stolen vehicle and purchased a van for us to use for the tour!”


Kim has attended all of our national openers and assists with ticket sales for each show. Kim was at our first live performance and well as our local CD release party in December 2017. She is the epitome of a “Super Fan”.


Without people like her, bands in their infancy would have no support system whatsoever. Enough emphasis cannot be placed on people like Kim Reaves Tate, a true angel to bands likes ourselves making that elusive journey to what we hope will be success.